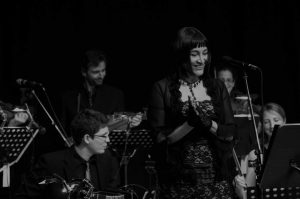 Nuevo Tango came to the Queen’s Hall last night, replacing the cold of a May spring night in Edinburgh with the warmth of Latin America thanks to another great performance from Mr McFall’s Chamber.

With candle-lit tables in place of the formal rows of seats, once the music of Astor Piazzolla’s operetta Maria de Buenos Aires began it was easy to think you were in Buenos Aires. Not least because of the backdrop of Geraldine Comte’s film of street scenes from that city which, with selected subtitles, enhanced the performance.

Astor Piazzolla, who died in 1992, was a fascinating musician and composer who straddled the world of classical, jazz and dance musics, fusing them into the new form called Nuevo Tango.

Maria de Buenos Aires, written in 1968, tells of a young woman born in a poor area of the city. She moves into the city centre and gets swept up into the world of music, dance, sex and crime and dies young – all of this in Act 1. The second act finds her spirit wandering round the town and commenting on it – including a chorus of psychoanalysts. She is finally reborn in a miraculous fashion and the work ends with hope.

Mr Mcfall’s Chamber played superbly, in a sensual musical flow. They already boast some of the best – and most versatile – musicians in Scotland and for this concert performance they were augmented by music director and bandoneon (accordion) player Victor Villena, with jazz guitarist Malcolm Macfarlane and tango violinist Cyril Garac.

Soloist Juanjo Lopez Vidal sang El Duende, the spirit who overlooked Maria. He has a very bluesy flamenco-style voice which evoked the passion of the work. Maria was sung by Valentina Montoya Martinez, a Chilean singer who brought great feeling and passion to her role – particularly with her great aria Yo soy Maria which she encored.

Internationally renowned tenor Nicholas Mulroy completely the trio of soloists on the night, in a number of different roles. There is no doubting his was the best voice on the stage, with his sweet and powerful tenor often dominating the music – but the question was whether he was too good to fit in with the ensemble and whether he was Spanish enough to evoke the Duende?

At times it reminded you of the famous documentary film in which Leonard Bernstein attempts to record West Side Story with great opera singers Jose Carerras and Kiri Te Kanawa. Great singers – but they are clearly wrong for the roles.

However this was a minor concern and did not spoil the enjoyment of an unusual and rarely performed work of genius.

On a very personal level, the whole evening brought to mind old friend and colleague Jan Fairley who died last year. Jan was a leading expert on Latin American music and would have loved this performance – and no doubt have written about it with her usual brio of knowledge and style.

Like Maria de Buenos Aires, Jan’s spirit still lives amongst us. And it is evenings like this which remind us why music and dance are essential for a civilised life.

Mr McFall’s has recorded La Pasionaria, which includes “songs and instrumental interludes from Ástor Piazzolla’s ‘operita’ María de Buenos Aires, where the character of María represents the tango itself.” It is available to buy from the McFall’s website here:  http://www.mcfalls.co.uk/Recordings/La-Pasionaria

There are several CD versions of Maria de Buenos Aires available to buy on Amazon, and an MP3 download. Here are two of them. Click on the images for details (will open the Amazon page in a new window):