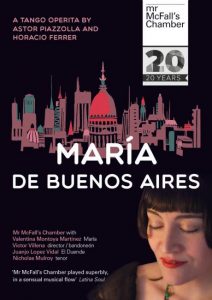 ‘I play with violence’, Astor Piazzolla once said. ‘My bandoneón must sing and scream. Sometimes I beat the bandoneón up.’ Throughout María de Buenos Aires, the instrument acts as a metaphysical force that engenders both desire and destruction, luring María from the Buenos Aires suburbs to the city’s underworld of tango, cabaret and prostitution, before driving her to a violent end. Piazzolla’s Duende, or poet-narrator, marks her passing by threatening to cut the bandoneón in two with ‘a verse like a pickaxe, thirsty, total, forbidden’. But his gesture is futile: the call of the city and its dance music transcends the grave, and María returns to Buenos Aires to walk its streets as a virgin shadow, before eventually giving birth parthenogenetically to a reincarnation of her former self.María de Buenos Aires is usually described as a ‘tango opera’, though Piazzolla and his lyricist Horacio Ferrer called it an ‘operita’, a pun on ‘operetta’ and the Spanish ‘obrita’ or ‘little work’. There’s nothing ‘little’ about it, however, and in some ways it attempts too much. Written for singers, speakers and players, it was conceived as a multimedia piece: film played an important part in its 1968 premiere, which took place against a background of increased censorship on the part of Argentina’s military government. Ferrer’s riddling, hallucinatory text can consequently be seen as pushing at the limits of contemporary acceptability, though it also buckles under the weight of the demotic, erotic and sacred imagery woven into its portrait of María, the whore-cum-madonna, who embodies the history of tango itself, by turns debased, idolised and endlessly renewed. The score, however, is a tremendous synthesis of Piazzolla’s work and influences, as some of the best tangos and milongas ever written collide with Bach-like toccatas and fugues, jazz and piano-bar music, all of it guided by the bandoneón’s pervasive presence.

Delphian’s new recording, the first for nearly 20 years, features the Edinburgh-based Mr McFall’s Chamber, longtime Piazzolla champions and excellent interpreters of his work. Victor Villena’s bandoneón does indeed sing and scream as he alternately seduces and harries Valentina Montoya Martínez’s Maria on her way to death and resurrection. There are suave violin solos, and dexterous guitar and piano riffs. Rhythms are crisp and precise throughout, and the pristine sound brings out plenty of sharply focused instrumental detail. Montoya Martínez, her voice earthy and lived-in, captures the defiance and vitality that drive María on. Juanjo Lopez Vidal makes a fine Duende, incantatory in his declamation and engrossed in the story he is telling. Best of all, perhaps, is Nicholas Mulroy – in territory far removed from the Baroque works in which we usually hear him – singing milongas like one born to it. Exhilaratingly done, and a fine achievement.