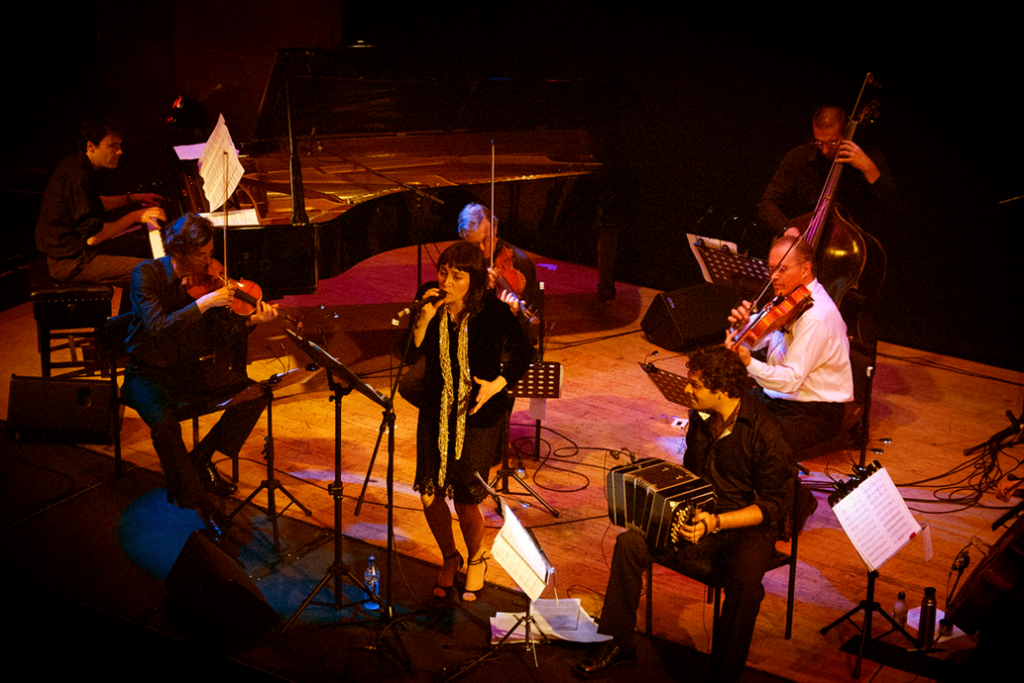 After a few pore-splittingly hot days, how very Edinburgh to cool down just in time for Tango Night! Actually it was a lovely, sunny evening—inside the hall, one might say, as well as outside in the street. The perfect sort of an evening to spend with the music of Astor Piazzolla, in this latest adventure in the company of Mr McFall’s Chamber.

This is a project that has been several years in the making, one that first began to take shape in the late 1990s when the McFalls met Valentina Montoya Martinez at Edinburgh’s Bongo Club. With characteristic eclecticism, the resulting programme also featured a healthy selection of Ms Martinez’s own songs.

Slipping easily into the first violinist’s chair, Cyril Garac brings the urbane elegance of a Parisian McFall, equally comfortable in the company of esteemed classical musicians and with the sublimated eroticism of the tango. He shares the stage with Victor Villena in the Quinteto El Después, and lends some of their to-die-for sang froid to the similar—though more economical—line-up featured in tonight’s ensemble.

Villena, the bandoneon master, has additionally spent time with the Gotan Project—a group that is to tango, one might say, what Martyn Bennett is to traditional Scottish music: a lively crossover fusion of traditional styles and contemporary urban sensibilities. Tonight, though, the techno vibe has given way to the Piazzolla repertoire, which has crossover ambitions of its own.

Meaning what, exactly? I guess the quest is to find the essence of a style and a sound, and to blend it with a notion of ‘mainstream’ in such a way that the essence is not lost on the one hand, while the resulting fusion is enriched and not merely flavoured with a passing tinge of the exotic. For Piazzolla the picture is complicated because he was attracted both to jazz and to the classical style. The resulting mixture of harmonic language, counterpoint and form might feel underdetermined to the classical purist, but the very fact of Villena’s presence advertises the value of that dimension.

It is Villena who gives the ensemble its aural focus. Of course that is due in no small measure to his own talent, but it is also a tribute to the singular eloquence of his chosen instrument, and by extension to the committed advocacy of Piazzolla. The bandoneon looks different from other styles of accordion. Unlike some varieties, which give a different note depending on whether the bellows are opening or closing, the bandoneon is the same both ways, and the bellows are wide, which means that a rhetorical gesture (like an up-bow or a down-bow on a violin) can be long and languorous.

The Piazzolla element of the evening featured numbers from his surreal ‘operita’, Maria de Buenos Aires. Since the heroine is the embodiment of Tango, and vice versa (I take it), the score includes several instrumental numbers, including ‘tocata rea’, during the course of which the bandoneon is accused of seducing Maria, and is murdered—the bandoneon, mark you, not the player.

There were also vocal numbers, which brought Valentina Montoya Martinez to the stage, though the first numbers she performed were two of her own, and ‘Neighbourhood Romance’ by Annibal Troilo, a contemporary of Piazzolla’s. It is a small thing to notice, but she arrived on stage in media res, as though she’d already been there for an hour—and immediately captured the audience’s attention.

Hers is not an especially powerful voice, though it is powerful enough; nor does she have an exceptional tessitura. But what incandescent warmth! What richness! And what an empathic flair for the subtle rhythmic thrusts of the tango lyric, and for generating chemistry with the instrumental ensemble.

Ms Martinez’s journey to Scotland has been a challenging one since leaving her native Chile in the late 1970s as the daughter of a political refugee. Without being overt or melodramatic, the backstory lends that particular kind of authenticity to her performance that engenders engagement and intimacy with her audience. Whether she was interpreting Piazzolla or her own material, most memorably ‘La Partida/Leaving’, and ‘Sola’, she held the audience’s rapt attention and, after two encores, definitely left them wanting more.

Here’s a thought: this programme gets another airing in Fife on July 25th. If anyone on the Later with Jools Holland team should happen to be passing, you should definitely check it out.