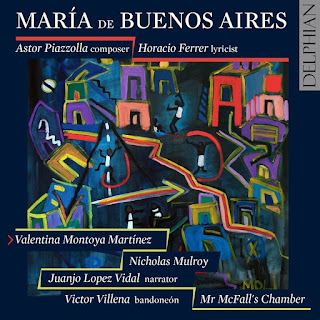 Astor Piazzolla and Horacio Ferrer‘s operita Maria de Buenos Aires is a fascinating beast, part opera, part musical theatre, part installation and all tango nuevo. For their 20th anniversary in 2016, Mr McFall’s Chamber returned to the operita, and this recording on Delphian is the fruit  of those performances.

This is Buenos Aires by way of Edinburgh, but the ensemble is directed from the bandoneon by Victor Villena, with Valentina Montoya Martinez as Maria and the tenor solos sung by Nicholas Mulroy. The important spoken role of The Duende is taken by Juanjo Lopez Vidal.

The performance uses Piazzolla’s original line-up of 11 players, (Cyril Garac & Robert McFall violins, Brian Schiele viola, Su-a Lee cello, Rick Standley double bass, Alison Mitchell flute/piccolo, Malcolm MacFarlane guitar, Phil Alexander percussion, Ian Sandilands & Stuaart Semple percussion, Victor Villena bandoneon/music director) and the whole instrumental combination has a wonderful authentic feel, Piazzolla’s seductive textures and timbres along with some rattling good tunes. Perhaps occasionally there is a lack of danger, but such faithfulness to both text and spirit is good to have. Victor Villena makes the bandoneon a real character in piece, thrilling at times. And good to have a bandoneon, the last time I heard the piece live it was with reduced scoring and an accordion.
A lot stands or falls also with the role of The Duende. Here it is taken by the gravelly voiced Juanjo Lopez Vidal. Perhaps he is a little forward in the mix, but there is no doubt that Juanjo Lopez Vidal’s really lived in voice does full justice to Horacio Ferrer’s wonderfully elliptical words, give a world-weary sense to the drama which counterpoints the seductive textures of Piazzolla’s music . There is a new English translation of the words, which certainly helps to elucidate things.

Maria/The Shadow of Maria is Valentina Montoya Martinez, wonderfully smoky voiced and sexy, whilst Nicholas Mulroy is surprising casting in the tenor roles. Rather than coming from a cabaret background, he brings a lyrical elegance but also a slow sexiness too. There is also a chorus of eight, who provide the speaking chorus at various times, giving the Spanish text a directness which belies the mixed nationalities of the chorus members.

But it is the music itself, and the instrumental performances which I kept coming back to, that distinctive combination of seductive melody and crisp rhythm, with the spiciness of harmony which gives the music its tang of danger.

The packaging is excellent, with a long article on the operita by Robert McFall, plus Piazzolla and Ferrer’s full text and a translation by Ann McFall.

This is in some ways a surprising disc, but Mr McFall’s Chamber have been championing Piazzolla’s music for some 20 years. Whilst it is perhaps not the darkest nor most dangerous of performances, it does Piazzolla and Ferrer the compliment of taking their work entirely seriously and creating a disturbing yet seductive whole.